JSCocoa a bridge from Javascript to Cocoa

CIColorTracking tracks a color blob from an image and overlays another image on top of it. It does that with a Core Image filter. How ? 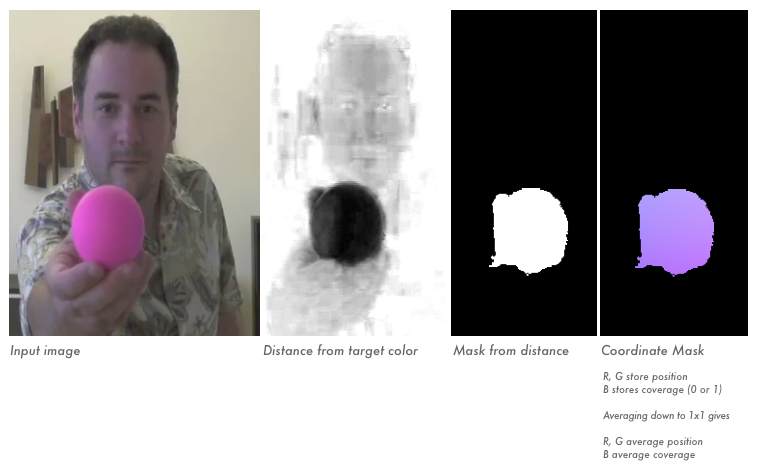 To overlay an image on top of blob matching a given color, we need a location : the center of the blob.

If we have a set of 3D points, eg all vertices from a model, we add positions and divide by point count :

To work from an image, we could go about the same way : go over all pixels, find the matching ones, average them down. We can't do that in Core Image as it is limited to kernel functions : no explicit loops, no temporary variables — only a kernel taking inputs (images, colors, numbers) and outputting an image.

The trick that CIColorTracking uses to average matching points is to go over ALL pixels of the image, repeatedly halving its size until it's 1x1. (This is done with a custom filter written in ObjC). It adds pixel coordinates and divides by area :

I guess this method will be obsolete in Snow Leopard, where OpenCL will hopefully simplify this down to one function.